Be Over-Prepared for an Iceland Winter Holiday

Be Over-Prepared for an Iceland Winter Holiday

Visit Iceland in the Winter

If you are planning an Iceland winter holiday it is best to be over-prepared for lots of snow and wind.  In one moment you could be enjoying a beautiful sunny day and within minutes the weather can change to a blizzard where you can’t see a thing in front of you!  We discovered that Iceland in winters can be very unpredictable which can lead to travel issues throughout the country, as was the case our February Iceland holiday.  In case you are thinking of having a holiday in Iceland; check out our experience and a “must” pack list for your outings.

Disclaimer: This post contains affiliate links, which means I  make a commission at no extra cost to you should you click through and make a purchase. Thank you so much for your support!

Our trip started off with us arriving on an early Sunday morning. We could see from the windows at the airport that we landed we were going to definitely get our winter in Iceland holiday.  As we went to pick up our car at the rental counter we were given some advice- a storm was coming and he didn’t think we would make it to our hotel destination an hour and half away.  For fear that we would end up homeless for the night, I immediately called our hotel the Ion Adventure Hotel who in turn called the City Ion Hotel in Reykjavik.  They kindly gave us the last room (which was a suite) available for the night.

So out we headed from the airport.  The roads were getting seriously difficult quickly, we decided it was best to go directly to the hotel.  Luck continued to be with with us as we grabbed the last parking spot which happened to be right in front of the hotel.  Upon entering the Ion city Hotel we found a few couples in the lobby hoping to book a room for the night.  There were no rooms left, not only at our hotel but also the entire city was sold out.  we were informed the  airport was shut down soon after we drove off.  So now the city was over booked with guests who could not fly out and who could not get to their hotels, homes or vacation homes outside of the city of Reykjavik.

The hotel staff went above and beyond trying to help the people who were looking for somewhere to stay, calling other hotels and homes to hopefully accommodate some of the stranded people.  We realized very quickly how fortunate we were having a bed to sleep in for the night.

We knew coming to Iceland in February could be a cold and snowy holiday, and thats exactly what we got.

Up early the next morning we headed out of town once we confirmed the roads were reopened.  We had a tour to catch approximately one and half hours away.  Feeling confident we entered the address into our GPS on our phone and easily followed the directions.  As we approached the last turn to our destination something didn’t look right, as in nothing was there.  Time to call the tour office.  To clarify, we managed to follow the directions all the way to the “other” town with the same name. One of the towns is in the Southern part of Iceland, which we navigated to, while the other was more north, 2 hours away.

One thing you learn, while traveling to Iceland in February, the Iceland travel tour companies are used to mishaps and weather issues and are very accommodating.  They rebooked us for an Iceland Glacier hike for Wednesday.  From here we thought it was best to continue to take in the beautiful sites as we drove towards our hotel.  In hindsight, it was a good thing we didn’t make the tour, because storms came in again and we would of been stuck a couple of hours away by the time the tour would of ended. Which would of resulted in us be stranded somewhere. 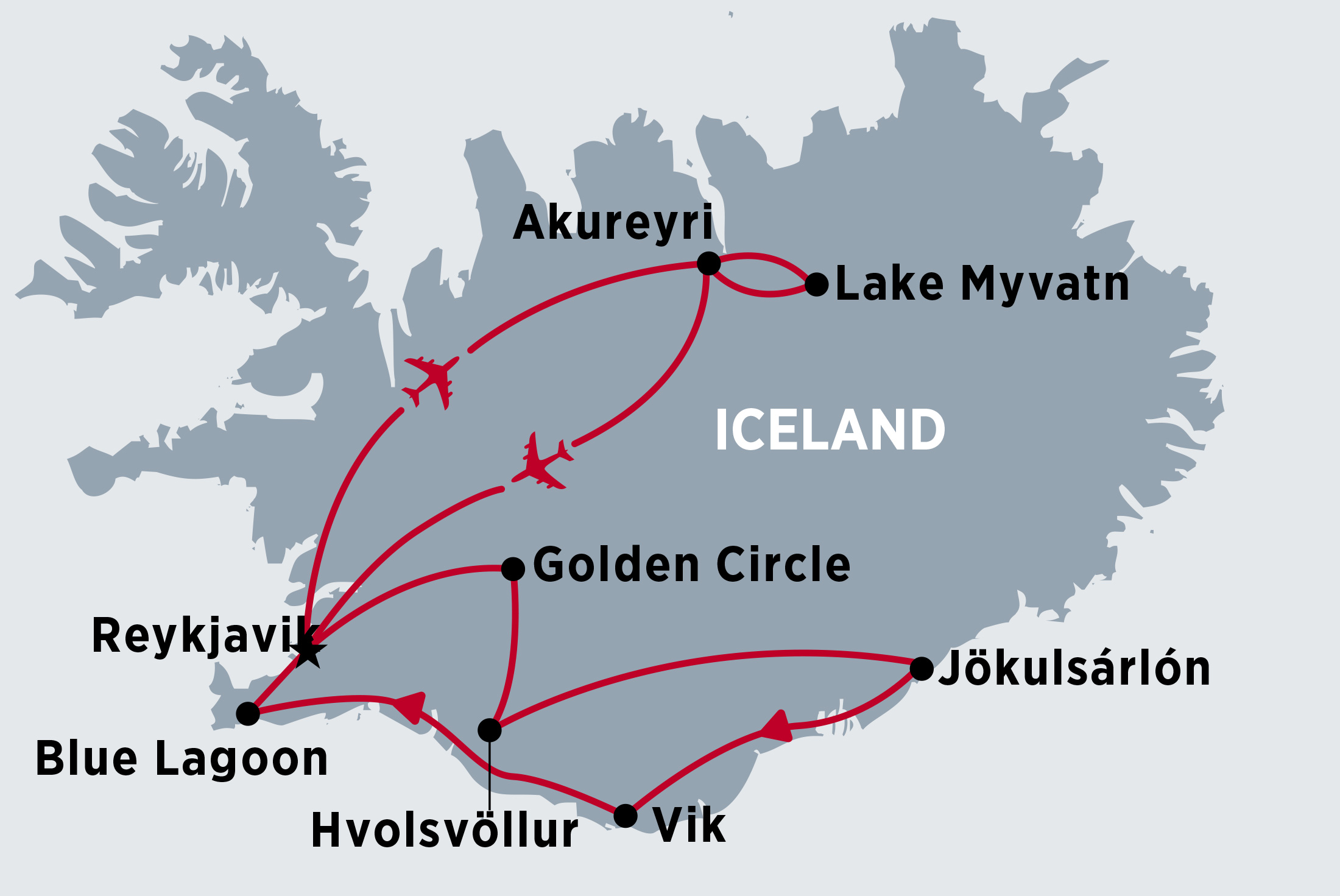 Road.IS is a must!

Above all, it is very, very important to know, you have to keep in contact with the Iceland road (road.is) web site .  You could check it one moment and roads will be open and 15 minutes later they could shut down.  They do not put up barriers, there is no real time to do that.  With the snow coming down combined with the wind up to 50 miles an hour blowing more snow off mountains onto roads, the roads can become a major snow bank quickly in Iceland weather February!

The next day we left our hotel and drove about 10 minutes. Running into a “white out” where we literally had to stop our car and sit for more than a minute till we could see again, we decided to come right back to the hotel.  Again, our intuition was good on this Iceland winter trip. Other cars that left the hotel in the morning all returned about 5 hrs later following a snow plow.  Talking with a few of the guests that were in those cars, we found out some were stuck in snow banks for 4 hours waiting for help. Understanably, they were noticeably shaken and frightened from the experience. Thanks but no thanks I will skip that particular Iceland winter experience!

The Ultimate Packing List For An Iceland Winter Vacation

Our trip was still fabulous, we were able to see some gorgeous nature creations as will be in other posts.  Simply said we loved Iceland!  But we learned it is best  to be over- prepared for the Iceland winter holidays.  Putting together and Iceland packing list is highly suggested,    It is essential you have the right Iceland gear.

Indoor Clothes To Take To Iceland

The indoor clothes to take to Iceland would be what you would bring to any winter vacation; cozy sweaters and warm comfortable pants.  Inside is warm and cozy so no worries there.  It is for the outside you need to know what to wear in Iceland in February!

We found our packing list of clothing for Iceland in February helped us out tremendously! Here are a few things that we packed that at the time we thought we might be “over doing it”, but thankful we did!

Click on any of the items pictured to take a closer look.

Canadian Goose coats for temperatures below Zero degrees.  More for the winds, the temperature was mostly in the 20’s and wonderful on the sunny days, I even had my jacket open at times.  But boy was I happy with my Canadian Goose coat when it was colder out.  The coats are well known for a good reason- they work!

32 degree long underwear.  Why did I not know about these before?! (okay I live in Florida- so maybe that is why).  Amazing! Thin, silky feeling but keep you so nice and warm without sweating.  I will never go anywhere cold ever again without these.  We brought three pairs each for a weeks stay.

Smart Wool socks : Three pairs each for the week, you can wear them more than once.  Feet were never cold!

Waterproof Pants: These are to put over any pair of pants you have on.  Waterproof pants for Iceland winter is a must.

Waterproof and insulated gloves:  If you can get the ones that allow you to still work your cell phone that is even more of a plus. Sound Touch all weather gloves are something we found online which turned out to be a fantastic purchase!  BONUS- you can use them on your touch screen! Best gloves for Iceland winter!

Hat with mask: Not really very fashion forward, but even I was appreciating them when we went whale watching. I loved the easy of the Magnemask that we purchased.  You were able to easily pull it up to hold secure by magnets!

Waterproof Boots: Probably one of the most important items to have for dressing for winter in Iceland. Invest in a good pair, where them around the house before leaving on your trip to make sure you have no issues with fit. I loved the Sorel for myself as well as my husband.

Ice/snow Grippers with water proof boots: Strangely enough, I could not believe the amount of people I saw trying to master the ice with sneakers on.  Not only was it ridiculous, but it really was dangerous.  By the time they walked through the snow and ice they had to be soaked!  Grippers make every step you take feel more secure on the ice.  Easy to put on and take off- why wouldn’t you? Every store in Iceland was selling them, maybe thats a sign?

Blanket: An extra blanket in the car can come in handy if your cold or your seat has gotten wet.

Cross body bag:  One like Neat Pack that is easy to access but can carry a lot of different things too

Chapstick:  Protect your lips, nothing worse than having chapped lips

Small packs of tissues: Doesn’t everyones nose run in the cold? Have a pack of these in your pocket or cross body bag

Dryer sheets:  Yes, dryer sheets.  Winter brings static cling hair, have one of these dryer sheets in your bag and run it trough your hair…perfect and easy

Battery backups: For your cellphone, camera. Cold weather can make you battery run down faster

Paper Map: in case phone/GPS looses batteries or no signal

Heat sacks:  Perfect to throw in your boots, pocket or gloves to help keep warm

Walking stick:  if you are feeling you need a little more extra stabilization or plan on hiking more difficult trails

Iceland money:  Even though, credit cards are accepted pretty much everywhere; but also having some cash on you is always a good idea too

Zip lock bags: In fact, a ziplock bag is a great way to protect your phone from getting wet if you are using it for photo’s or just to given extra protection in your pocket.

Ice Scrapper:  Before you drive off the rental car lot, check that you have a snow brush in the car, you might need it!

Camera, Video Camera, Drone:  You will want to capture everything in this beautiful country!  I bought Kevin a Breeze for Christmas, works great but the days we went to use it it was little too windy.

Iceland in the winter

All in all, we really loved how much Iceland offers.   Holiday, snow storms and all!  The countryside is filled with unexpected nature creations, magnificent horses and stunning waterfalls! Travel to Iceland in February or anytime during the winter, you will love it!   Please check back here to to read other articles about on Icelands best places to visit:

Glamping in Montana Near Yellowstone Park